The private foundation founded by Josef Frauscher in 2002 highlighted the protection of the environment in their foundation goal from the very beginning.

Frauscher Sensortechnik, which was owned by the foundation until its divestment in 2016 and founded by Josef Frauscher in 1987 as a sole proprietorship, already pursued these goals in the form of innovative devices for railway safety technology and ultimately for the economic operation of environmentally-friendly railway transportation.

In this context, Josef Frauscher initiated the first studies for the development of Stirling engines as early as 2001. In 2006, Frauscher opened its own building, including a test stand for engine development.

In 2008, the small team was demerged from Frauscher Sensortechnik into a separate company, Frauscher Energietechnik. The company was renamed as frauscher thermal motors GmbH in 2014 and built a state of the art technology centre for engine research in the middle of 2016. 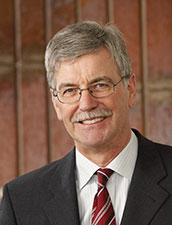 In contrast to the material world,
the depth of knowledge gained through research
and development is endless.